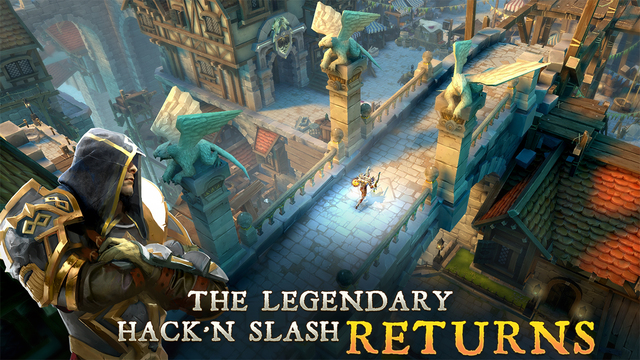 From the Developer
The legendary Dungeon Hunter series returns with the roar of a dragon! Play the most intense hack ‘n’ slash game ever on mobile that will pull you deep into its fantasy world.

Join millions of Bounty Hunters in the latest opus of the most INTENSE and IMMERSIVE Hack ‘n’ Slash game ever on mobile. It’s now time to PROVE YOUR WORTH!

After stopping the demon invasion in the Kingdom of Valenthia, the world remains shattered, crumbling at its very core — destruction and desolation seeping from its wounds — but even when we try to rebuild, things never go back to how they once were… Now, things are different.

– Embark on a Single-Player Campaign through 5 Realms and countless dungeons
While seeking vengeance for your forsaken, embark on an immersive journey as our spirit-imbued hero through the five shattered realms, and become known as the most notorious Bounty Hunter of them all.

– Co-operative Gameplay
Hire your friends or other players as Allies to help you on your journey of vengeance and bounty hunting.

– Asynchronous Multiplayer
Customize your Stronghold with a large variety of creatures, manage and defend it, and raid opponents’ Strongholds to ravage their loot.

– Daily and Weekly Events
Daily dungeons will reward your demon-killing skills with unique materials to evolve and fuse your gear, while weekly Wanted Challenges will require you to get on top of the leaderboard to get the best rewards.

– Unrivaled Hack ‘n’ Slash Action
Discover how the animations and controls have been revamped to deliver the most amazing combat moves and even more satisfying deaths.