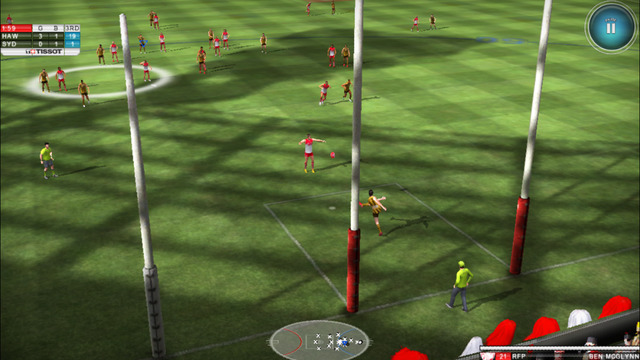 From the Developer of AFL LIVE 2

Lead your team to Premiership glory in the most realistic AFL experience on iPhone and iPad. Play online and dominate your rivals in real-time multiplayer! Featuring 2015 Toyota AFL Premiership Season Fixture and Team Line-ups.

*** This is a fully featured AFL game with NO In-App Purchases and NO advertising. All content is available with the initial purchase ***

A Universal App with HD optimized graphics for retina resolution.

Playing at home? Witness the action on your HDTV with AirPlay wireless streaming. Simply connect the device to your Apple TV and play AFL LIVE 2 on the Big Screen!

REAL TIME MULTIPLAYER – ONLINE!
Grab a mate and go head-to-head Online!! Choose your side and put your skills to the test against your friends in real time multiplayer. Master the game and defeat your rivals for a spot on the Global Leaderboard.

SINGLE MATCH
Play as your favourite AFL team against the CPU. Relive classic AFL moments and create your own custom matchups with over 60 teams from the AFL, VFL and more to choose from, plus over 15 playable stadiums including Adelaide Oval, MCG, SCG and The Gabba.

CAREER MANAGER
Manage your team across a 15-year career and become a legendary AFL Coach. Begin your career playing in the TAC Cup or the VFL and work your way up into the AFL and achieve Premiership glory!
Simulate match results or take part in the action throughout your football career. Train your team to improve their skills as well as handle any injuries and tribunal decisions that come your way. Step into your management shoes as you control staffing, finances, contracts, sponsorships, draft picks, player trades and much more!

FREE ROAM
Practice your torpedos and improve your skills in a matchless environment.

COMPETITION
Play your way through additional football competitions including the NAB U18 Championships and the International Cup.