Fortnite Mobile: Tips and Tricks to Win the Battle Royale

Fortnite Mobile is now available for iOS and we're almost ready to see it on Android too. But surviving and being one of the last players left in the circle is not easy. In Fortnite you have to combine several skills to win because besides shooting you're going to have to build—a lot.

Set yourself up for victory

Before you start playing, there are a few settings you can customize. As a first step it is good to adjust the sensitivity of the screen and change it according to your taste and experience in the game. Personally I prefer to have all three sensitivities high enough so I don't have to move my finger too much if I want to turn around.

There are also a couple of parameters that I like to deactivate when building, such as turbo construction and automatic material change. I prefer to choose at all times what to put in and not spend resources automatically. 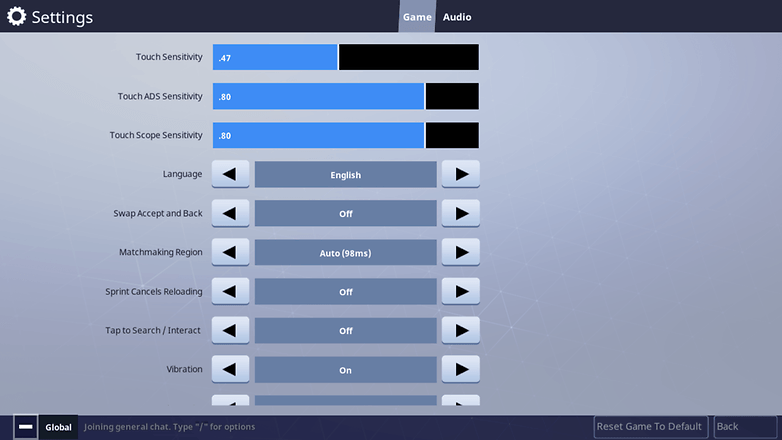 Choose where to land and do it close to your crew

If you play as a couple or in a team, look at the map before jumping to see where others want to go. Staying together is the key to success. Fly fast and head for the area where you agreed to land.

Choose well where you land. Don't go in a building where there's already someone inside. Try to do it directly in a window. If you don't have much skill with the parachute yet, you can always land on the roof. There are no stairs but you can chop the roof, so you can enter the building and take the materials with you to build.

Loot everything, not just weapons

Looting is the key. There are 5 types of weapons, from normal to legendary. Of course you should keep the best ones. You'll be able to recognize them quickly by the colors. From worse to better: grey, green, blue, purple and yellow. The other players are the best source of weapons. Remember also that you can shoot with your left finger.

You usually find enough ammunition, but it's always good to save just in case. If you have a knocked out enemy and want to kill him to get his items, shoot with a weapon that you don't use much so you don't waste ammunition from good weapons.

Always carry a long-range weapon, as in the last part of the game when everyone is hiding in a tower a powerful weapon can make all the difference.

Running is fundamental. A moving target is very difficult to hit. So when you go from one building to another or when you run from the storm, you'd better get up to speed. Just double-tap on the virtual thumbstick to lock yourself into run mode, and repeat to change back to normal speed when you're safe.

Building can save your life

This is one of the most difficult aspects of Fortnite in mobile due to the precision of the touch controls; doing it fast requires a lot of practice. Collect a good number of materials during the looting phase but make sure you are quite alone, as destroying things generates a lot of noise and can attract the enemy.

When building, use stronger materials on the outside and wood on the inside to save hard materials. Build walls to defend yourself and place a ramp to shoot over. In the last circle, it is normal to find towers. If you're playing in a group, it's best to work together: the bet shot keeps shooting at the enemy while the rest try to dismantle the fortress. You can also build to trap an enemy.

If they shoot, you jump

When you jump, it's harder for others to catch up with you. If you're running and you hear or see bullets whistling around you, jump to save your life. Movement is essential to stay alive as long as possible.

Sort your weapons close to your fingers

We've got five holes to organize weapons, health items and shield items. The first hole on the left is always occupied by the pickaxe but the one on the right is usually freer. Touch the button on your backpack to open the right panel. At the bottom you have the five holes that you see on the screen of the normal game. Place your favorite weapon on the right to activate it right after you finish building. During a game I change the order of things several times so that I can choose the best weapon at all times.

The bandages are fine if the storm has caught you and the acid rain has made you puppy, but to preserve it is much better to carry a first-aid kit. Slurp drinks are best used as soon as possible so that they don't take up space, and if you don't have any free space, you can always throw something away with the bandages or drink something and then pick up what you have thrown away.

Use headphones and watch the display

Hearing where the shots come from is the first thing you need to do to react in time. With a stereo headset, you'll recognize in a thousandth of a second where the shot was fired from. In addition, the display will warn you where the noise is coming from in case you still had any doubts. There are even times when I was hearing a gunshot on one side but on the screen I saw that someone was moving on the other side, so pay attention to both.

While Fortnite hasn't yet arrived on Android, we're keeping an eye on all related developments in our article on the hottest games coming to Android this year. In the meantime, eager gamers should check the following articles for the best games on the Play Store right now.