Smartphones have taken over the mobile gaming space, and have crushed the handheld gaming market in the process. But there are still a small number of things handheld gaming devices do better than smartphones, including their control pad. It almost seems too obvious to say, but having multiple analogue buttons specifically configured for handheld gaming will provide a much better gaming experience than merely tapping around on your screen.

Depending on the games you’re playing, and how often you play, the difference in control can impact everything from comfort to performance. In some games, it’s easy to imagine having a competitive advantage over players who are using less precise equipment. In some games, it’s hard to imagine being able to play them at all without a proper gamepad.

There’s a simple reason why game developers don’t make first person shooters where PC gamers and console games are allowed to play together. The PC gamers wipe the floor with console players because a mouse is far more precise than an analogue stick or D-pad. And Bluetooth game controller gamepads can sometimes give you that kind of advantage in the mobile space. 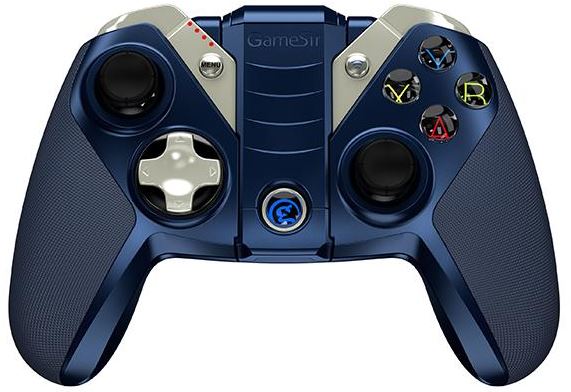 GameSir is a Hong Kong based company, and while it’s not exactly a household name in America, they are one of the world’s largest manufacturers of game controllers. The M2 had somewhat humble beginnings on Kickstarter, but in the time since, it’s been optimized, streamlined, and otherwise all-around improved. The M2 is amongst the first game pad controllers specifically for iOS, and light you might expect from such a device, it has some totally unique features. 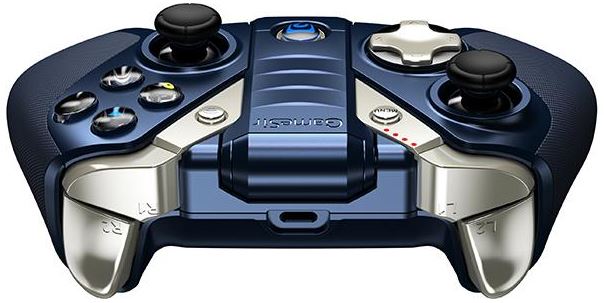 The GameSir M2 MFi gamepad uses a fairly standard 6.1 x 4 x 2.5-inch build. It’s approximately the same size as the PS4 and Xbox One game controllers, but is slightly more handheld. Within the pad, you’ll find an overall design philosophy made in pursuit of precision, reaction time, and accuracy. Much of that is achieved through the ability of impressively designed pressure sensitive buttons with 256 levels of pressure sensitivity.

Pressure sensitivity buttons are one of the features that distinguish mediocre Bluetooth controller gamepads from excellent ones. You may or may not be currently playing a game that can take advantage of the pressure sensitivity settings. But simply having the capacity can mean quite a bit when you load up a game and don’t have it.

The original M2 controllers used a generic black aesthetic that most gamers were generally unenthusiastic about. The redesigned GameSir M2 is available in metallic red and blue, both constructed with a newly designed gorgeous illustrious shine. Both the red and blue versions of the M2 ooze modern gaming aesthetic, and the metallic paint helps highlight many of the M2’s better functional points. 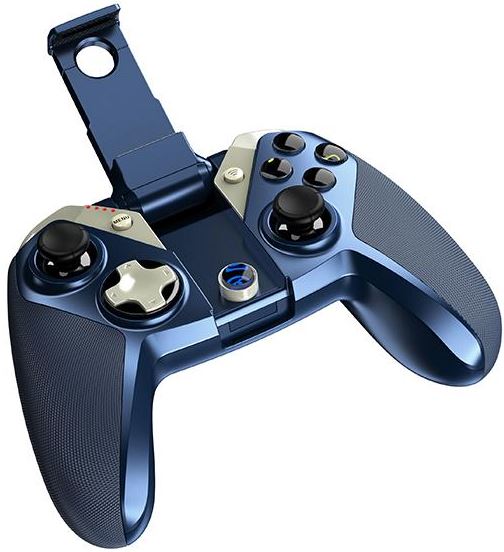 Like the original M2, the M2 Mfi uses rubber coated handles for a protective and secure grip. And along the length of each handle, the grip has been texturized. The texture partially reinforces your grip on the GameSir M2, but more than that, it certainly helps make give the M2 its distinctive striking appearance. The result is a sort of sci-fi aesthetic.

As odd as this might see, the M2 is also the first iOS controller with an LED power indicator. This is partially because the mobile gamepad market is relatively young, and hasn’t been a tremendously competitive space. Frankly, many gamepads for the mobile platform are cheap garbage, and the M2 is filling a space in the market for high quality game pads.

The front of the M2 features the same essential design that most controllers use, allowing the M2 to feel familiar from the moment you first hold it in your hands. You’ll find four buttons in the right quadrant of the controller, two menu buttons in the center, one D-pad near the left thumb, and two rotational analogue sticks.

The top of the controller offers four shoulder buttons, positioned for smooth contact. Each can be mapped and remapped as necessary. And pressing them provides the same firm tension and release you experience from an ordinary cord-based controller. At the top of the M2, you’ll find a landing space for your smartphone. That’s where the gamepad snaps onto your mobile devices for secure holding with the M2’s dock. Holding your phone in the dock isn’t required, due to wireless connectivity, but having the space does make mobile gaming a little bit easier. 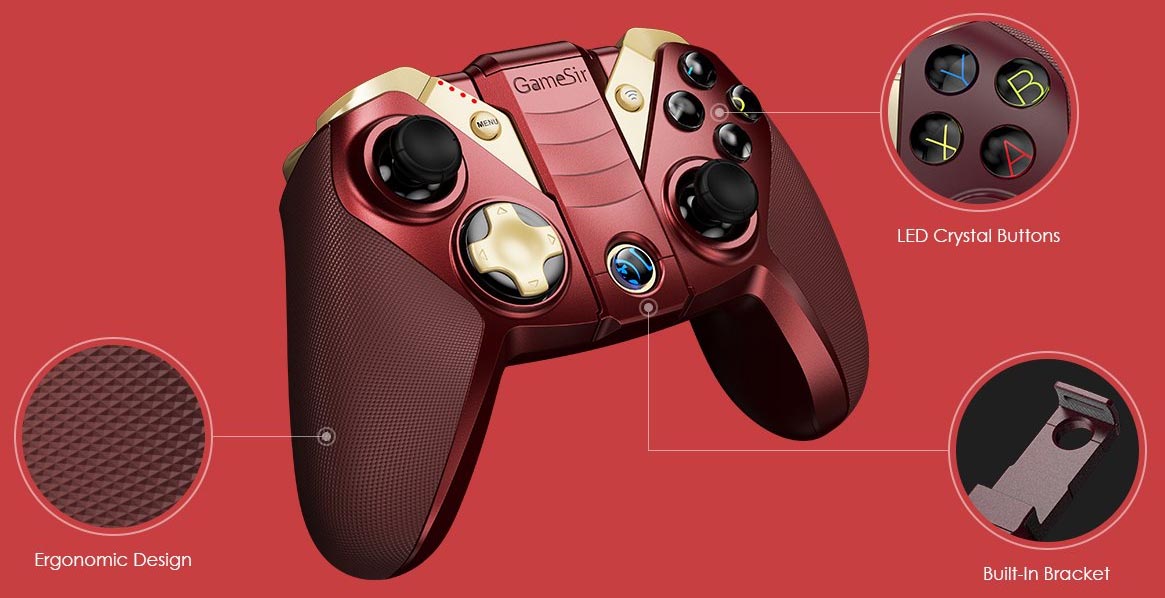 Another thing you should expect from just any gamepad is plug-and-play accessibility. A controller shouldn’t be any more difficult than plugging in a cord or connecting to Bluetooth. And fortunately, that’s precisely how the M2 works. The wide compatibility between iOS devices is facilitated by the supported Bluetooth 4.0 connection. As a result, it’s easy to play your games anywhere you’re within range of your Bluetooth devices.

When you’re holding a gamepad in your hand, the element of comfort is every bit as important as the functionality of the buttons. It’s the difference between riding a child’s bike or professional racing bike. Both bikes will get you across the street, but if you’re going any further than a few feet, you probably have a substantial preference for one or the other. And the exact same thing is true of console controllers and gamepads. 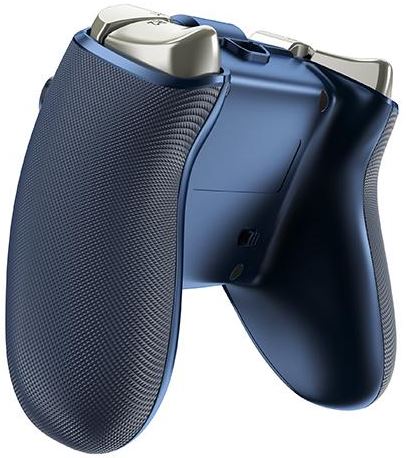 But suppose the GameSir M2 MFi isn’t being used with your iPhone, suppose you’re connected to an Apple TV instead. That being the case, the M2 feels somewhat lightweight compared to console controllers, largely due to the fact it isn’t burdened with tumbling weights for vibration features. While vibration can be a neat mechanic, it’s not necessarily something you’d want attached to your smartphone.

The texturized rubber grip handles are another distinction between the GameSir M2 and similar gamepads. When you build handles entirely out of matte plastic, the material being unable to dissipate heat is going to lead to sweat. And with your phone tied to the end of the controller, dropping the controller has the potential to be far more disastrous than dropping a console controller. The added rubberized grip partially helps solve the issue of heat dissipation, but more importantly, is one more safeguard between your smartphone and the floor. 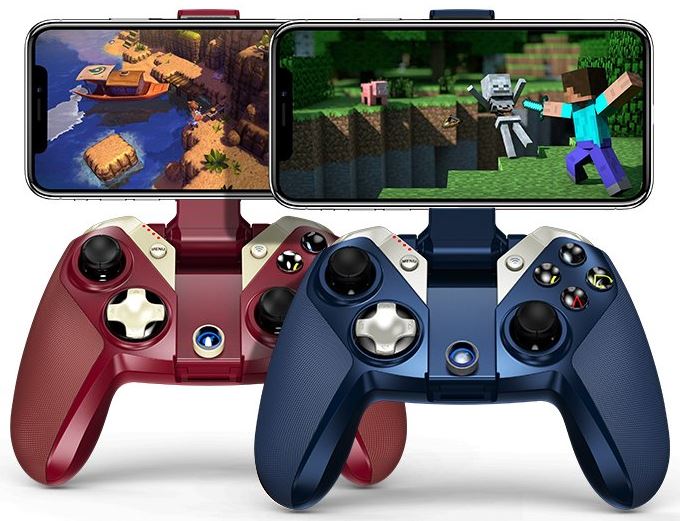 The M2 uses an 800 mAh lithium-ion battery. With a full charge, you can expect at least 18 hours of continuous play. Some people are able to achieve nearly twice that battery life, it partially depends on what types of games you’re playing. Playing games that are using the pressure sensitivity feature, or games where you’re pressing frantically, you can expect closer to the 18-hour estimate.

Unfortunately, there aren’t any rapid recharge features you can take advantage of for the M2. Fortunately, you can get a full charge in about 2 hours. If the M2 continues to see updates in the future, rapid recharge would be a nice addition. Since the majority of the controller’s power consumption relates to Bluetooth connectivity, you won’t generally encounter problems with battery life on these types of devices.

Sometimes, there are big advantages for choosing bigger brands. When it comes to digital electronics, more often than not, those bonuses are made up of software support. And whether you’ve heard of them or not, GameSir is a big brand. Their free app is an extremely impressive gateway to helping you find a virtually endless number of gamepad supported mobile games. It’s not quite the same as getting hundreds of free games with your game pad, but it’s pretty close.

GameSir M2 was specifically made for iOS. Consequently, it works great on an iPod, iPad, Apple TV, and any of your iOS devices. You can anticipate excellent native support for any Apple device you want to use. But you’re not going to find that kind of support for any other platform, like Android. As long as you’ve got at least one iOS device that supports Bluetooth, you’ve got everything you need to get started playing games.

Apart from the added layer of software support and its game-discovering app, the M2 doesn’t come with many extras. You’ll get the necessary USB charging cable, and a less-than-necessary user manual. If you’re an avid smartphone user or a gamer, it should take you about five seconds between the time you snap the GameSir M2 onto your phone and the time you start playing.

Who Should Choose the GameSir M2 MFi Bluetooth Gamepad?

The GameSir M2 MFi Bluetooth Gamepad is for people who want to transform their smartphone into a proper mobile gaming device. It’s not a barebones controller. It’s a fully loaded, well designed, and extremely well crafted gamepad. The construction is what you’d expect from a full-fledged, name brand console controller. Pressure sensitivity buttons and in-depth iOS compatibility push the M2 further into perfection.

The M2 is for people who take gaming seriously, and it’s ideal for sports and adventure games. If you’re playing slow-paced games with virtually no clicking, the M2 might not be your best choice. If you play slow games and you play casually, the M2 may also not be your best pick.

But if you’re looking for quality above all else, M2 might be the ceiling for great Bluetooth gamepads. You’re not going to find better iOS compatibility, better construction, or a wider feature set on any other gamepad in this price range. All in all, the M2 is a good choice for people who find themselves wanting to play a games on their smartphone on a regular basis.